Since the Dutch secret service put up camera's at Amsterdam Central Station there have been no suicide bombings or other terrorist attacks. That proves the method works! Right? Not really.

There has never been a suicide bombing or terrorist attack at Amsterdam Central Station. Or anywhere in The Netherlands for that matter. Ever.

Claiming camera's prevent those attacks and illegaly listening in on citizen's phonecalls helps against terror so it's all worth the loss of privacy and billions of euro's is the same as claiming the number of children dropping has to do with the declining number of storks. Proving storks deliver babies. Or putting a banana in your ear helps keep alligators away from Sesame Street. Just try to disprove that fact!

Who needs facts when there is Fox?

People are not impressed by facts. For instance: peanuts are more lethal than terrorism. Alcohol kills more people than cocaine and most terrorist attacks in the United States were performed by non-muslims. You probably won't believe me because 'your gut' (ie the media) tells you all terrorists are muslims. Who cares about facts when there is Fox? http://www.globalresearch.ca/non-muslims-carried-out-more-than-90-of-all-terrorist-attacks-in-america/5333619

The government of Israel can't do anything wrong and they are right to kill all palestines they can find and make life a living hell for those they can't kill. But who gave them that right? And suppose it would happen to you? How would you react if this happened to you and your children? Is it reasonable to let children suffer because maybe their grandfather did something wrong?

First it were Jews...

In retrospect everybody hates what the Nazi's did to the Jews. At the time it actually happened most people couldn't be bothered. They weren's Jews and it happened to people in far away countries! Right? A ship full of Jewish refugees ankered just before the coast of the United States. Of course the US government held out its arms and welcomed the poor people who fled from Nazi terror! Wrong. The ship was send back and over 900 were send back to Europe. Around 25% of those men, women and children perished at the atrocities of the Nazi regime.

Anne Frank herself was denied entrance to 'The Land of the Free' 'because America is full!' 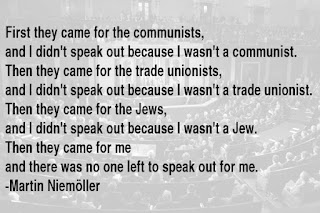 Now there are hundreds of thousands of people who demand Muslims should wear a recognizable insigna of some kind on their coats so you can spot 'those terrorists' easily from a distance. Some kind of big cotton yellow M will do just fine...(But people might think all Muslims work for McDonalds!)

Do you need a reason to start thinking?

May I ask you a question?

In short: when did you stop to think for yourself?