That's only what most of us think and it differs not from what people thought who lived 2000 years ago. And there's nothing wrong about that. It's just hard to think of the unthinkable.

Here some ancient objects which source or meaning dilutes us to this day:

The truth about your bloodline

A question about guns

Lawn darts are illegal in America 'because they can hurt children.' But guns are okay. That sounds absurd, doesn't it? And it is: http://www.armedwithreason.com/debunking-the-guns-dont-kill-people-people-kill-people-myth/ 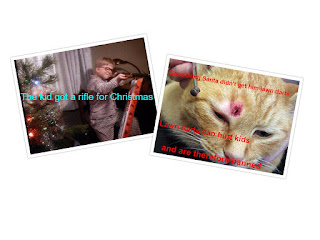 'If people can't get their hands on guns, they will just kill with knives.' I have searched but have been unable to find an actual scientific report backing up this claim by the NRA. I have however found statistics that proof without a doubt that it's much easier to survive a knife attack than an attack with a gun. On the same day as the Sandy Hook school shooting, a man in China stabbed 23 children and an elderly woman at a primary school.
Nobody died. Just saying. https://en.m.wikipedia.org/wiki/Chenpeng_Village_Primary_School_stabbing 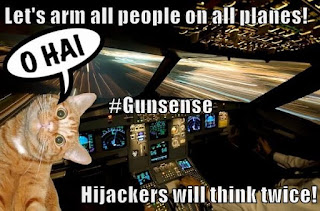 What do you think: will there be less hijacking and terrorism in the sky if everyone out there has a gun?

Tens of thousands of Americans (not exaggerated!) die every year from (mostly gun related and a lot of suicides) gun violence. More toddlers than terrorists shoot down people, yet the US government spends a trillion (that's a huge amount of money) on fighting terrorism and zilch on telling parents not to leave a loaded gun lying around. http://wncn.com/2015/11/23/police-5-year-old-boy-shot-killed-by-older-sibling-while-playing-with-cat/

Luckily some people seem to be coming to their senses: California has just passed some laws that recquire background checks for anyone who wants to buy a gun: https://www.theguardian.com/us-news/2016/jul/01/california-governor-jerry-brown-gun-control-pass-veto

But seriously: responsible gun owners keep their gun - unloaded! - in a safe. Right? So how do they use it to protect themselves and their family against murderous burglars? 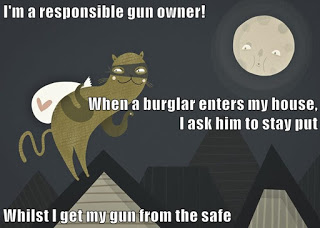 A pro gun man responded and declared
a gun is not useful against terrorist attacks
and useless against people who want to rob
or kill you. He just likes having a gun for
the sole reason of having a gun.
Apparently. 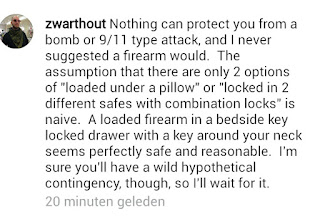 When a burglar enters his home,
he will fumble for the key, the locked drawer,
his gun and the safety.
In the dark.
While the burglar patiently waits to get shot.
Apparently.

With using valid arguments: what are your thoughts about gun ownership? Who should be allowed to carry, who shouldn't and why?
op Thursday, August 11, 2016 No comments:

The REAL problems in the world

What are the real problems in the world?

Leave your personal top three in the comments.
Preferably with reasons why.
(You may add ONE problem not mentioned above)
I will write a follow up with the results
op Thursday, August 04, 2016 No comments: