On conflicts and emotions

The USA seems to be in a constant fight with countries in the Middle East. Mainly because those countries are muslim nations that treat women badly, oppress their civilians and so forth. Right? The single most extreme muslim country is Saudi Arabia. Women are not allowed to even drive! On top of that, the country is known to support terrorist organisation Al Qaida.

So why is it that nobody seems to wonder why the United States of America and other western nations sell billions worth of weapons to the most extreme muslim country in the world?

Amidst all controversies, lies and wars you'd almost forget by far most people in the world are cool. Like the person who shared these behind the scenes pictures of the epic movie 'The Wall' by Pink Floyd: http://www.oldpicsarchive.com/behind-the-scenes-of-pink-floyds-the-wall-14-photos/14/

Have you seen the movie? Very impressive and emotional!

A lot of people (especially men) are afraid to show their emotions. They think it's a sign of weakness to show others you can be hurt. I think it's a sign of strength to show you're human because humans make formidable opponents. It's emotions that drive us. So yes, I cried when Trevor Bolder, bass player in my favourite band, Uriah Heep and one of Ziggy Stardust's 'Spiders from Mars' died. It's only natural.

Is there anything that makes you cry?

Let me know in the comments.

Is Trump a fascist?

Is president Donald Trump a dictator? Is his regime a fascist regime?

Fact is his administration just published private details on numerous of oppononts of his policies.
http://www.slate.com/blogs/the_slatest/2017/07/15/white_house_publishes_names_emails_phone_numbers_home_addresses_of_critics.html
Giving Trump-supporters every means to 'deal' with people who claim Trump supporters are mostly white angry agressive stupid people.

Here are 14 traits of fascism, compiled by Umberto Eco. http://www.openculture.com/2016/11/umberto-eco-makes-a-list-of-the-14-common-features-of-fascism.html You can check for yourself which of these apply to the Trump regime. 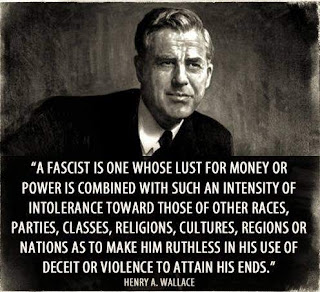 Can we travel in time?

Can we travel in time?

The story about the ancient watch has been (sadly) debunked: http://metro.co.uk/2015/02/18/8-times-photoshop-has-fooled-the-world-be-honest-did-these-get-you-5068756/ In other words: do a bit of investigating (it took me less than a minute to perform the Google search!) before you reach a conclusion on anything. 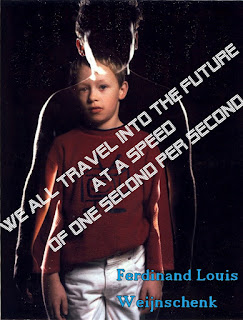 I don't believe in conspiracy theories

Personally I don't believe in most conspiracy theories. However I dó believe there are conspiracies. And lots of them too. Where ever there are groups of people, people bond to form a block agains other (groups of) people. It's simply the nature of things.

Here's one I made up that could explain a lot:
What if big oil companies and people in high places in governments conspire to pollute the air and water we live from? If everything is polluted, the only way to get our hands on clean air and water is to pay for it. With labor, sex, money.

And what if real estate people, builders and people in high places in governments conspire to rage wars? Destructive wars. So whole cities need to be rebuild? Guess who will get the contracts?

Too far fetched? Remember Larry Silverstein? He made plans for a totally new WTC-7, just about a year before the building (which he owned) collapsed. Coincidence? Why would anyone design a rebuild when the 'old' building is still standing and in perfect condition? And why did mr. Silverstein have his terror insurance pay out DOUBLED just weeks before the World Trade Center Towers (which he had purchased just months before) collapsed on 9/11. And isn't it an amazing coincidence Mr. Silverstein (click) had just gotten the rights to build new towers on the spot of the old ones 'in case they would come down due to a terrorist attack'? 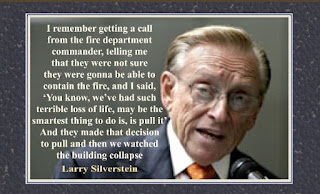 It's what he actually said: 'Let's pull the building.' In other words:
the building (WTC-7) was brought down on purpose (that's what 'to pull' means). So it did NOT collapse because it caught fire after it got hit by a piece of flying debris. Did you ever see a skyscraper come down because it got hit by a burning piece of debris? You never could have because that's physically impossible.

Mr. Silverstein got 'a bit of profit' out of the 9/11 terror attack: $4.55 Billion. That really is a lot of money. You would think he would have given some of that money to the families of those who died in the attack. But has he? 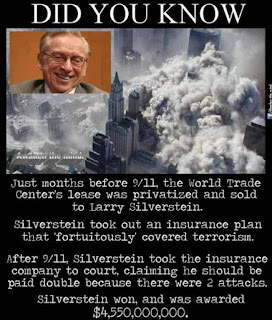 On the other hand: here are people doing their utmost to debunk above claims. And they really are doing a great job! Judge for yourselves (click)!

And isn't it a coincidence that mayor Guilliani was warned to go away further from the towers 'because they will come down soon' but he and the unknown inidividual who warned him 'forgot' to tell the civilians and firefighters who were still in the building? And isn't it a coincidence both Mr. Silverstein and Mr. Guiliani are close friends with the current President of the United States? Who - coincidentally of course - happens to be 'into construction and ownership of large buildings in New York'?

Yes, of course you can call all of the above 'a coincidence' but I think most things happen for a reason. What do you think?

Let me know in the comments.

Perhaps there's a conspiracy going on, making us believe in conspiracy-theories in stead of conspiracies.

Is Climate Change a hoax?

Donald Trump says he is convinced that Climate Change is a hoax, invented by 'the Chinese' in an effort to hit the American economy. But what's the real reason Donald Trump wants America to pull out the Paris Climate Agreement? Could it have to do with the 22 senators who urged their president to withdraw? And who just happen to make a lot of money in the fossil fuel business? Coincidence. Of Course. 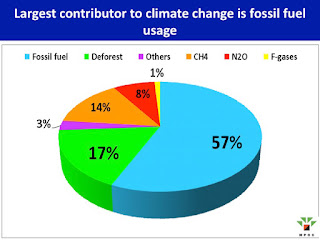 But isn't there anything we could do to get rid of our addiction to fossil fuels? Accept for jailing
the ones responsible for hurting our planet in excange for money? Yes, there is:
http://inhabitat.com/infographic-could-we-end-our-fossil-fuel-addiction-by-2050/

Every year around 98,000 people die of medical mistakes that could be easily prevented. In America alone!

So forget terrorists. When it comes down to killing civilians doctors and nurses do a much better job. Thing is - although some find it hard to believe - doctors and nurses are people. People get tired, cranky, distracted. In short: people make mistakes. And imagine yourself being a surgeon and they bring in your nasty ex who's really hurt you a lot? Would you stay professional and offer the best help you can give? Would your hands not shake?

Wouldn't it be great if people could be taken out of the equation when it concerns other people's lives? Good news! Remember Watson, the IBM computer that won Jeopardy? A similar computer program (click) can be used for medical diagnostics, reducing the chance for medical errors almost to zero. So what are we waiting for? Two things: people to stop being afraid of computers and people to stop being afraid of losing their jobs. 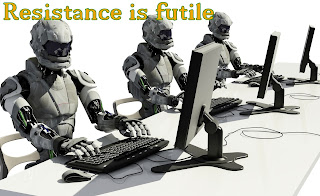