What's the No 1 problem in the world today?

What's the number 1 problem in the world today? TERRORISM! TERRORISM! TERRORISM! Wrong. Although of course it's terrible that there are people out there willing to kill and die for their believes, terrorist attacks 'only' kill about 7,000 people a year. That's the same number of people who die every year from eating peanuts. How much does your government spent on banning peanuts from bars and airplanes? Share on Twitter

What's terrorism? Most people agree it's threatening with or using violence to force others into adopting your way of life. By that definition Israel and the USA are terrorist organisations. Share on Twitter

Why do people use violence? Usually because they feel threatened. So if they wouldn't feel threatened anymore they would cease to be terrorists. Easy solution: stop threatening people! Share on Twitter

Others use violence because someone has done them wrong. Easy solution: stop the wrong doing! Share on Twitter

Some use violence because they're sick or simply idiots.

More reasons why there is so much violence in the world? Let me know in the comments!

Just wondering: if Jesus would show up today, how would people react to Him? I guess it depends on the location. Over the centuries our idea of His appearance has changed. Most likely his skin was of an olive/bronze complexion, as was fairly common in the Middle East some 2000 years ago. No, there are no biblical references to His looks. https://en.wikipedia.org/wiki/Race_and_appearance_of_Jesus 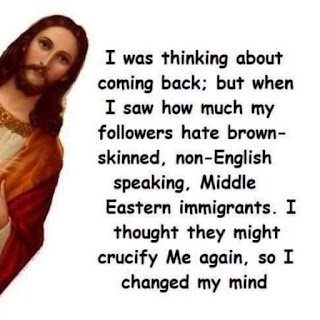 Yes, Jesus was 'a foreigner'.
That's why it's so strange so many people call themselves
'followers of Christ.'

So, what are your argumented ideas on the subject?

What if Hitler was never born?

Hitler was responsible for millions of deaths. But not all by himself. In his days a lot of people hated Jews. That was common. So what if not Hitler but someone else had risen to power in Germany in the 1930's?

Stephen Fry wrote a book about that thought experiment.

What do you think? How would the world look like today if Hitler had never been born?
op Thursday, July 14, 2016 No comments:

Dumb people should not be allowed to own guns

'If a war starts in your country, would you stay and fight or pick up your children and run?'

'So if a unmanned drone is about to drop a bomb on your house you would fight it? If a tank wants to run down your home you would wave a pistol at it?'

-'I'm just this regular guy so they have no reason to attack me personally.'

'So you own a gun to protect yourself from people who don't want to attack you?'

NRA: 'Only law-abiding people should be allowed access to guns!' Hands please from everyone who NEVER broke a law.

Some 30,000 people die from a bullet fired from a gun, in America alone. Two thirds are suicided. Most others are accidents, residential fights, muggings and a few of those deaths are considered self defense. Oh, and mass shootings take up just a minute minority of all that gun violence. Yet, the US government spends a trillion dollar every year on fighting terrorism. And not a penny on preventing children from shooting eachother with daddy's gun.

Hey, but what are facts when you got Fox News and your guts, right?

'Yeah, but millions of people thank their lives because they succesfully used a gun in self defense!' That is absolutely not true. http://www.armedwithreason.com/debunking-the-defensive-gun-use-myth/

According to this dumb man, dumb people should not be allowed to own guns:

In conclusion: everyone who does not need a gun for work (ie a police officer or a soldier) is dumb and should be disarmed.
op Thursday, July 07, 2016 No comments: