Save the planet! Go nuclear!

Greta Thunberg traveled across the ocean in a zero-emission ship. But even if she had taken to flight to spread her message ('Stop polluting our planet! Save the environment!'), would it be worth less spreading? The young lady from Sweden does not receive money to talk about her convictions. In fact she refused to accept an Environmental award (click) with a big sum of money attached to it. So the narrative: 'She is doing all this for personal financial gain' is debunked.

But what if she díd get paid? What's so terrible about getting paid to follow your heart?

Why do people shout at a little girl for wanting to save the planet and speak of shameful behaviour when a known liar is boo'ed?

'Greta Thunberg is a lobbyist for climate activists!' Actual lobbyists get paid. Lobbyists who push the agenda that nuclear power is the way of the future. Because it's cheap energy. When it's harvested in a safe way. Which it isn't. Yet. The toxic waste alone could cause an unprecedented disaster and end life as we know it. But don't let such a tiny detail ruin your day. Or the life of everybody and every plant and animal on the planet. Here's an article (click) pushing 'nuclear' as an environmentally friendly way to produce energy. It is written by lobbyist Michael Shellenberger. His lobbygroup 'Environmental Progress' has some interesting ties (click) with the regime of North Korea and claims 'nobody got sick at Fukushima and the evacuation was totally unnecessary because the meltdown was absolutely safe.'

Wondering 'cause your articles got my attention: who is that person you refer to? https://t.co/TXSXjLwN4V “While I am an advocate for renewable energy, my motivation is driven by economics, not by warm and fuzzy feelings,” a renewable industry leader emailed me recently to say.
— Terrence Weynschenk (@Terrebelius) November 4, 2019

'Saying Climate Change is caused by humans is just an opinion!' If that's true, so is: 'It really hurts when someone hits you really hard on the nose!' The presented evidence is similar to this example: 'See, I've hit this guy on the nose really hard and he didn't even flinch!' -'That's probably because he's dead.' 'But you said it always hurts when you hit someone on the nose! I just proved you lied!' Ha! -'I meant a living person.' 'Because I proved you wrong, you're now changing your narritive! That proves you knew you were lying and means I'm right. Ha ha, I won! Nah, nah nah nah nah!'

Mr. Shellenberger has been found to 'accidentally get his facts wrong' (Fox-speak for 'lying') on other climate issues (click) as well. But that's probably coincidental. Just that an influential politician happily endorsing Michael Shellenberger, Justin Clark (click) just happens to be in charge of the team of lobbyists 'selling' the 'President Trump is the greatest! (click)' brand to interest groups. An interest group that's very populair with politicians who suppert Trump is 'Environmental Progress (click)'. From Michael Shellenberger. 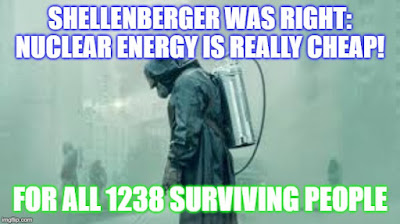