War on drugs but not if celebrities take them

Why is a rich person who OD's 'a celebrity who couldn't handle the pressure' and a poor person 'a junkie who deserves to die'?

Remember when Amy Winehouse died of an overdose in the bathtub of a luxury hotelroom? She was a poor misunderstood wonderful and beautiful white female artist who had difficulties handling the pressure of being famous. Right?

Remember the poor black guy who died of an overdose in an alley in Washington DC? Of course not. He was not a poor misunderstood wonderful and beautiful white female artist who had difficulties handling the pressure of being famous. He was just a junkie who deserved to die because he was stupid doing drugs, knowing they can get you killed.


The American government is very clear: drugs are evil and should be banned. Everone using them should be locked up! That's why - under the 'War on Drugs' 40,000 Americans are in jail today for smoking marihuana. None of them are celebrities and most of them are black. If the US government is really serious about taking on drug use, why don't they raid Hollywood and arrest celebrities?

All life is sacred! Right?

When then president of the United States George Bush, invaded Iraq, he told the president of France he did that 'because God told him to do it'. Click this link for the full story on that.

Of course all white world leaders are decent christians. Apparently it's wrong to kill other people, following the logic: 'Me religion requires me to do so.' At least, that's what those same world leaders claim when they bash islam and blame the religion (a religion is not a person, stupid! And therefore can't be blamed. It's the people who practice it who are often idiots) for just about everything that is wrong in the world, including the killing of innocent human beings.

But killing people from the base of christianity seems to be not a problem at all. 'God is on our side so if innocent civilians die because we toss bombs at people we think might become terrorists one day, that's not our fault but part of God's plan.'

Why is that? And who decides which life is sacred and which is not? Is the life of a Panda bear sacred? Your dog? The mice under your floorboard?

How many people do you know who are very happy with being in a hurry all the time? My guess is: not many. Or to be more precise: not a single person is happy with rushing.


So why do so many people do it?
Does it hurt to take the time to do things well?
Hurrying often costs more time than taking it easy, because you don't need to go back or do it again because by hurrying you made a mistake.

Take the time to take it easy.
Breath.
Try to enjoy what you're doing, even if you don't really like doing it.
Try it.

Read this article and find out why rushing usually costs you more time (and energy!) than taking things slow.

Love has no label

There are people who hate people because they love people. Suppose being gay was the norm and you were prosecuted because you are a guy who just happens to be attracted by women. How would that make you feel? Think about that before you condemn others for loving someone. Please.

I bet you love someone and that someone loves you. It could be your partner or a secret lover. Your grandmother or your stepbrother. Love does not care about his or her skin colour, sexual preference, his or her religion, age or even the gender! Love is just love and has no labels. Why do we label love? 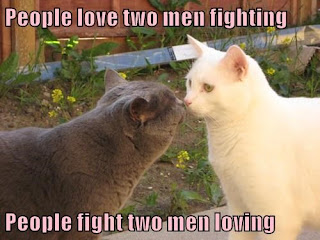 The death penalty: 4 % is innocent

When the FBI was confronted with the fact that over decades their 'specialists' on forensics had messed with samples of found hairs on crime scenes and probably a few dozen innocent people have been found guilty and have been excecuted as 'proven' murderers, a spokesman lifted his shoulders and mumbled: 'Sorry.' That was is. No one has been held accountable and no one has been punished for this grave error. Well, not yet, anyway.
http://www.washingtonpost.com/local/crime/fbi-overstated-forensic-hair-matches-in-nearly-all-criminal-trials-for-decades/2015/04/18/39c8d8c6-e515-11e4-b510-962fcfabc310_story.html?tid=pm_pop

Rick Perry has no problems with the fact that 4 percent of all the people on deathrow turn out to be innocent. But then they are already excecuted. He did however take it to court when he found out that four people who voted in het state commited fraud when voting. That percentage is close to zero.

With the death penalty still in action, America is in the same list as Iraq, Iran, Saoudi Arabia and China. Who would want to be on that list? And how come crime rates in the USA are not significantrly lower than in - for example - Finland? That's an easy one: it's because having the death penalty does not help bring down the crime rates!

'Yeah, but death penalty brings down murder rates!'
Well, no, it does not. 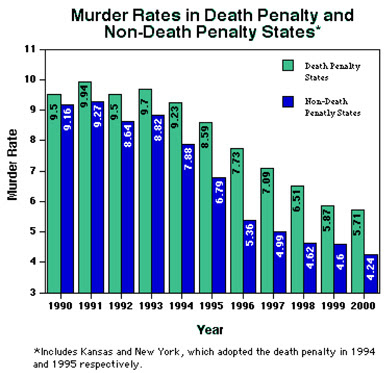 Just look at the figures: there are even less murders in states that don't have the death penalty!