If Obama had said what Trump says

What if then president Obama had told the CIA they are just a bunch of Nazi's? And when literally confronted with the highest ranking people in the intelligence agency a few days later simply state: 'When I said that, I meant the complete opposite. Of course!' I think Donald Trump would have said some harsh words directed at Barack Obama.

What do you think?

Do you - like Trump's son Eric - that Michelle Obama had access to a timemachine when she copied her speech from Melania Trump? 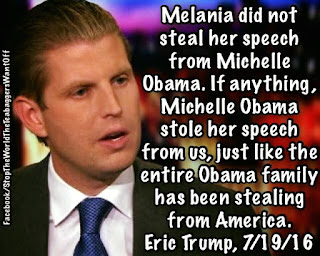 Mr. Trumps very first official statement to the press as president was his claim that the turnout at his inauguration was the largest in American History. 'The field was filled with people right up to the very back of the Mall.'
Well, reporter Raj Mathai stood there and shot a short video with his mobile phone while Donald Trump spoke to the crowd

Of course, politicians are known to lie. But shouldn't we worry when a president's primary concern is not the people's wellbeing but his own hurt ego?

He promised we would give 'many jobs' to 'a lot of Americans' and to put an end to immigrants taking over American jobs. So his followers must have been extremely surprised when the very second Donald Trump became President the very first actual job he created was for an immigrant.


#Fact: the first job @realDonaldTrump gave someone in his capacity of @POTUS was to an immigrant
https://t.co/wX2S9bX7Gs
— Terrence Weynschenk (@Terrebelius) 24 januari 2017

And speaking of Melania: what was she thinking in this moment?


This is like a shot from Eastenders pic.twitter.com/lTlSRV6fHu
— The Poke (@ThePoke) 24 januari 2017


The new president is known for his cheating on his wifes and his lack of respect for women. So, because pictures often say more than words, here you can see the differences between the former and the current president in how they treat their First Lady: 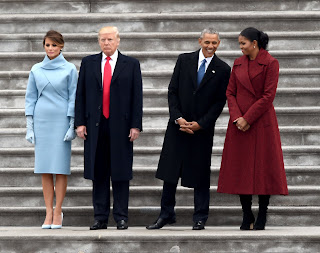 I know, this is 'just a moment' so to be totally cool here are a few more shots from the same batch. Just to show you the...er...full picture: 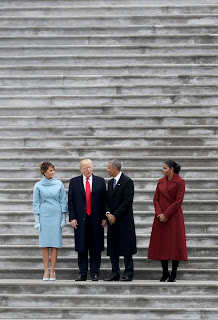 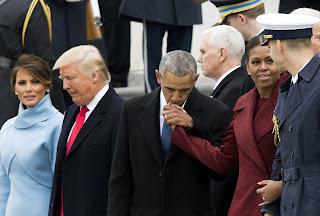 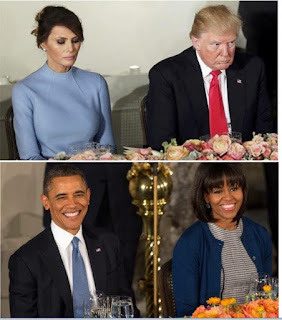 Here is another picture as an example from how the two men - earlier in their careers - treat their ladies: 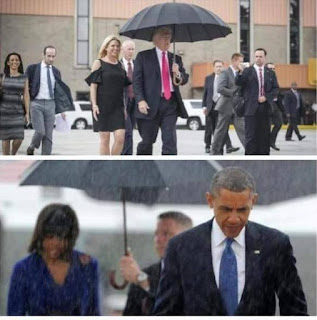 If you could be married to either one, which man would you prefer to be your husband?

Mr. Trump often complained that President Obama used to play golf when on vacation. 'I will never do that!' he shouted at rallys when running for president himself. 'A president is too busy to play golf!' A promise he broke by playing golf at his own weekend resort. Every single weekend of his presidency. In the first month alone of his presidency The Donald cost the American taxpayer 10% of what the Obama presidency cost them in eight years (Click). It's true.

What's NOT true is that 'all those immigrants are criminals!' But the Department of Homeland Security simply lies (click) to the American people.

And about his ties with Russia (not alleged. It's proven): I think it's more than a coincidence seven Russian diplomats suddenly died (click) in a course of several weeks when investigation started surrounding Trump's ties to Vladimir Putin. And how come Mr. Putin is the only world leader who hasn't been insulted by The Donald?

Of course mr. Trump will never ever reveal his tax returns. Simply because the truth about his businesses would come out. He will resign the presidency rather than release his taxes.  (click)

Until a few months ago people could get in direct touch with the Whitehouse to complain, talk to personnel, react to news, congratulate a president with his wife's birthday or whatever. Now, when they call, they are told the Whitehouse only communicates with 'the common people' through Facebook Messenger. Alas, the message does not provide a contact number, accountname or address. So the Trump Administration made it impossible for citizens to directly address an issue with Whitehouse staff. I wonder why...(no, I don't).

What I personally find extremely hypocrite is that the American people and their leaders (Republicans and Democrats alike) were outraged at the thought of a foreign nation interfering with their elections. If there's one country that has often interfered with other countries elections, it's the United States of America! 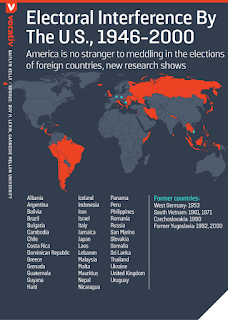 The things the new President Of The United States (POTUS) says appeal to a lot of people. Basically because he 'speaks their language'. Meaning he chooses his words like a twelve year old who's learning the language. Inventing words like 'bigly'. It may be the reason he does not like regular people to get a proper education. That's why he chose Dolores Umbridge Betsy DeVos as Secretary of Education. Who does not know the basic rules of English grammar. As shown in this tweet. 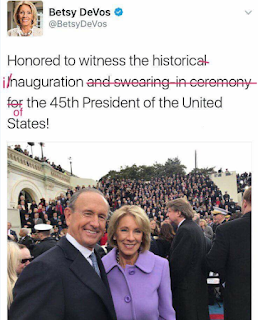 Hir first thing on the agenda: taking money away from public schools to give that money away to private schools.

The fact her family donated 200 million dollars to the Republican Party of course had nothing to do with her nomination.

The new 'leader of the free world' wants more jobs for more Americans. I'm afraid it's merely a matter of time before he says: 'Wars create jobs. Let's have more wars! It's great for the weapons industry and when lots of people are killed that creates even more jobs! A great way to kill lots of people is using nukes. We have so many of them! And so many people worked on making them! And they were so expensive! So it would be a shame not to use them! Hey, there are Muslim terrorists in Paris so let's bomb Germany!'

The Donald thinks healthcare is like buying expensive furniture: if you want it, you should pay for it. 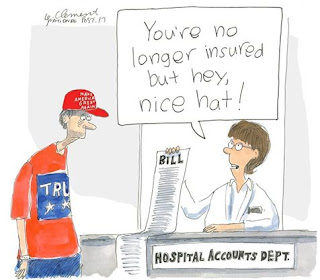 He does not want people to receive free or 'cheap' healthinsurance so his first act as president was to repeal The Affordable Care Act, commonly known as 'Obamacare'. Yes, they're one and the same plan.

So I guess he took away the free healthcare plan from all those Republicans in his army cabinet who always voted against Obamacare. But what a surprise: he didn't! 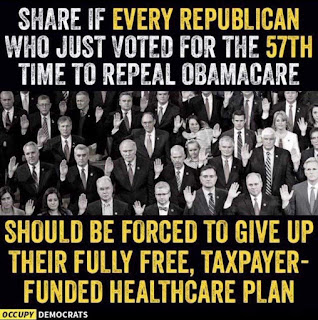 Here's a clip that could explain a lot about the new president:

Looking forward to reading your thoughts on this. While you can still freely share your thoughts that is. And - since I wrote this earlier - if Donald Trump is still President of the United States of America.

Can only Muslims be terrorists?

Why is that? Did someone state that only Muslims can be terrorists? Was every Irish person a terrorist in the years the Irish Republican Army (IRA) was very active in killing people with guns and explosions? Was every Christian a terrorist when the Crusaders set out to kill everyone who refused to be converted to Christianity?

When there was a muslim terrorist attack that killed over 30 people, why did no one ad the colours of that country to their Facebook profile picture out of sympathy with the victims? Is it simply because the victims had a dark skincolour because the attack happened in Somalia? If you do want to show your support with those poor people: this is what the flag of Somalia looks like: 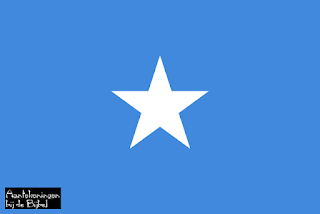 When the 45th president of the United States of America stated there was a terrorist attack in Sweden, the night before he held his first rally for the elections of 2020, the Swedes were surprised (click). Yes, there had been an awful attack. But months earlier. And it was a bunch of white supremacists that cowardly attacked asylum seekers.  The terrorists were not Muslim refugees but 'decent white local Christians'. Yes, we have a president who clearly lies for no other reason than to make sure Muslims are hated. And he's not being impeached.

If God exists, I'm sure he would punish Trump for pretending to be a Christian. But alas:


You could read my words (and I do have more. Believe me) but perhaps it's easier if I just showed you a picture and a quote from a little girl who got killed because 'the land of the free' turned down her visa application: Anne Frank

Now, replace the word 'Jew' with 'Muslim' and try not to feel embarrased.
Good luck!

Why do we kill people?

Rules should apply to everyone and always! Yes? Apparently not. Most people can't get away with stealing 100 dollars. Yet others easily get away with stealing millions. It's illegal to kill an other person. Let alone if that person is unarmed and severely wounded. Unless the one pulling the trigger is an Israeli soldier (click) and the victim is a Palestinian who minutes before stabbed an Israeli soldier. Right?

It clearly was not a case of self defense. The shooter consciously took the decision to aim and fire, planting a bullet in the head of an already taken down enemy. Most judges would judge that to be cold blooded murder. Here's a link to the filmed incident (please do not watch if you can't stand people getting killed):
http://news.sky.com/story/israeli-soldier-convicted-of-killing-wounded-palestinian-10717632 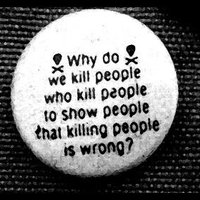 With all the negativity going around it's sometimes hard to see there's a lot of great people out there, doing their utmost to make other people's lives less hard. The invention of Loopwheels is just one example but for those who are willing to see it there's a lot more good news out there.

Do you know of something worth the mention? Let me know in the comments section!

What's you definition of freedom?

It's hard to make people understand what I mean by 'Is it okay to take away freedom in order to preserve freedom?' and 'If we're serious about having freedom, why do we take it for granted our freedom is being taken away from us and we applaud the people who do that?'

So I've come up with these (click to enlarge) so called 'Lolcats': 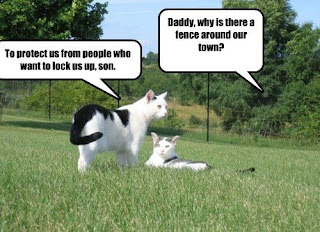 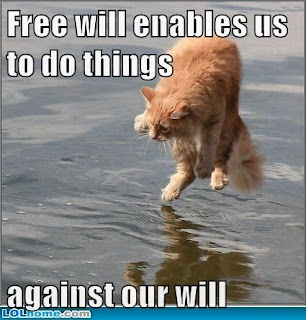 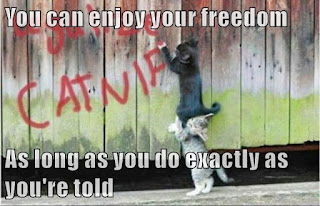 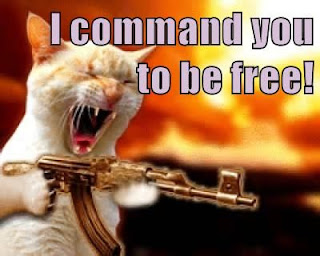 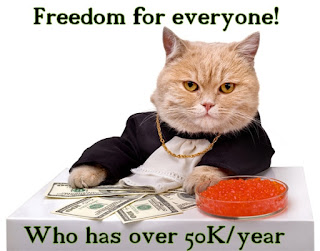 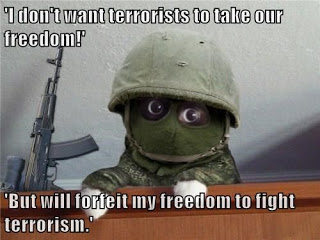 So what do you think? Are you truly free? Should we take other people's freedom so we can have it? What's you definition of 'freedom'?

And what's the difference between being free and only believing you are free?