According to 'Brexiteers' they are against the European Union 'because the EU is not democratic but England is (click).' Just to be clear on how democratic exactly: when were the elections that made Elisabeth Head of State?

Another argument: 'We are better off by ourselves!' Is that why 'leave' voters ask Scotland and Ireland to please stay in the UK 'because we are stronger together'? I find this confusing. 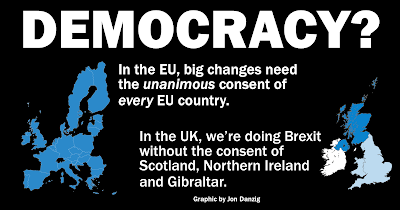 What percentage of England's citizens chose Boris Johnson to be their next Prime Minister? How many British people voted for Boris Johnson's brother to become a minister in his government? 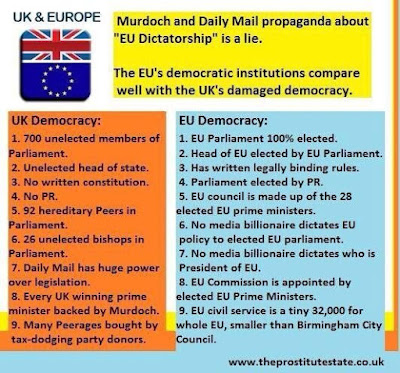 In the present situation the UK has deals with all EU countries. Because they work as one body on things like border security and trade. Under leadership of Boris Johnson the UK has a few months to negotiate all those different deals again with all inidvidual EU membership states. A long, complicated and costly process. Or leave without a deal, meaning people from outside the UK will need visas in order to stay for more than three months. Prices of imported products and services will go through the roof because there will be no fixed price arrangements. Et cetera.

I know of people who voted Brexit but now regret they have been mislead by Rupert Murdoch, Nigel Farage and the likes. How about you? Do you think will work out and my friends in the UK will be better of than before they were part of the UK?

One tiny example: a company in Barcelona offers free delivery for every amount over a few kilos of their delicious Spanish ham 'to every address in the EU.' UK-citizent will - from november 1st onwards - pay substantially more fot this ham than people in The Netherlands. Do you find that fair? Will the British Prime minister pay the difference out of his own pocket? I don't think so. Do you?

Fight socialism! No taxes for benefits!

When asked what they dislike about socialism Americans often say they don't like the idea of a part of their income going to people who need stuff they themselves don't need. Like foodstamps.

That's hypocrite. Because they don't mind if somebody else pays a part of their income for the maintenance of roads, even though they are not car owners. Tax payers money also goes to the funding of public schools. People pay for that, even if they don't have children. Even if your house never burns down, if you're an American part of your tax money goes to the local fire department.

But hey, let's use a system where everybody pays for their individual needs and the government is not involved in distributing tax money. Your house is on fire? Run out, buy a firetruck and end the fire. Or rent a fire truck and pay for firemen to save your house. Want your kid to go to school? Pay the full tuition. Want to use the road? Pay toll on every single crossing and exit.

That's what people want, right, a system where only the user pays? If you don't want to pay the hospital bill, simply don't become sick. It's really that simple, right?

You know, because you don't like socialism. 'Because socialism takes money from the poor and gives it to the rich.' So tell me how come that's describing today's system of capitalims under rule of the Republican Party, led by president Trump? 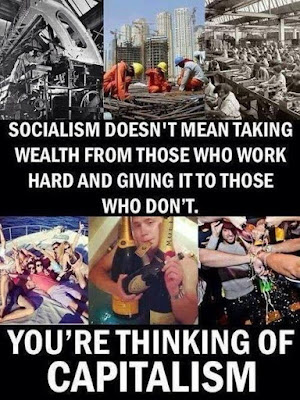 Or do you only like benefits when they benefit you personally and you simply just don't care about others?

The rich really are getting richer

The rich really are getting richer. But some still believe in a 'trickle down' economy: when you give more money to the rich it will 'trickle down' on those with less money. 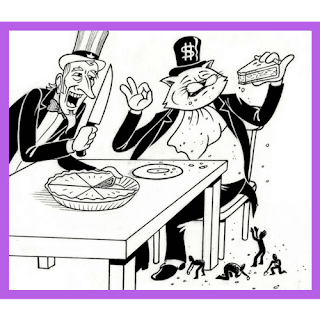 Sounds nice but simply isn't true. Globally ten percent of all people (click) get over half of all the available money. 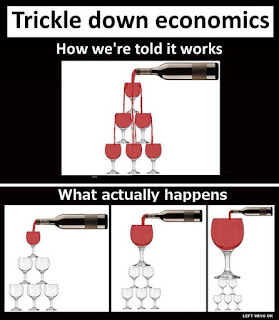 And that number is increasing. At some point the ten percent will have all of it and the rest will be either dead or starving. But without people to exploit, what will the ten percent do?

When large corporations actually paid normal percentages in income tax (in the seventies), the capitalist system actually worked. For most people anyway. So why not go back to those days?

You care for your health and the planet so you only want to eat fruit and vegetables in their natural form, before the food is genetically modified by men.

First you'll have to understand why 'genetically modified' does not always stand for 'bad'. Did you know carrots use to come in multiple colours? In their natural state there colour ranges from white to dark purple. Here's the story (click) why you mostly see orange carrots these days. Basically: it was a marketing stunt for the Dutch nobility, the 'House of Orange'.

Here's how some of the fruits and vegetables you find so 'natural' actually looked like before they were subject to human modification:

Is being hypocrite the norm?

'If you first buy an Austrian newspaper, fire a few people I don't like, hire a few I do like, start a campaign that gets me elected and start a construction company, I will make sure you will get all the government contracts.'

Strangely enought mister Strache said: 'I shouldn't have said that but the only ones who did something illegal were the ones who published that tape.'

Promising a foreign agency government contracts once elected in exchange for their illegal help with your election campaign seems very normal as wel as easy and makes you think if this man is the only one in the world who does business in this way.

Which other politicians asked 'the Russians' for help getting them elected?

Saying you are 'against all foreign influence' is only for fans and followers apparently. Making asking a foreign entity for help getting elected rather hypocrite behaviour. I'm guessing his followers won't mind.

Just like there are still people who believe Nigel Farage when he claims to be 'against the elite' although recently surfaced evidence proves he accepted tons of money (literally) from a banker who will benefit from the Brexit mister Farage claims he wants 'to help the English people'.

And just like there are still people who believe politicians like Newt Gingrich who claim to be 'defenders of Christian values': 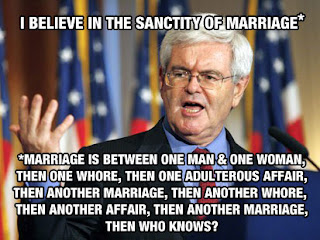 And here's anti-abortion politician Tim Murphy (click) who just got caught asking his pregnant mistress to get an abortion.