A few months ago there was another school shooting in the land of the 'free'. In Santa Clarita a 15 years old boy tried to kill his classmates. Luckily he 'only' managed to kill one of them.


The Democrats will now use use the victims of the Santa Clarita shooting (like they did my daughter) to try and take away your rights!

Who uses the death or injuries of children as political weapons?

In case the tweet got deleted, here's a screenprint with my replies next to it: 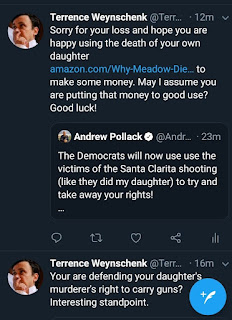 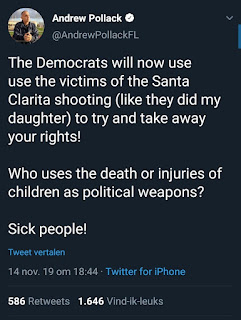 I really don't understand how anyone can blame someone for 'politicicing' a gruesome act but has no apparent difficulties with monetizing (click) the death of his own daughter who was killed in a school shooting. Can anyone explain? To me it seems mr. Pollack tells people it's not okay to gain political benefit from the death of a high shool student but it's a good thing to personally gain from it financially.

Mr. Pollack is adamant in defending his daughter's killer right to carry guns ánd wants schools and politicians to do more to prevent gun homicides. If it was up to him every school in the world would have bullet proof windows, metal detectors, armed teachers and students wearing kevlar school uniforms. He forgets what sane people know: if you want to fight a disease, aim your attention at the cause, not at the symptoms, let alone the consequenses.

Fellow gun nuts claim drugscontrol is the only way to stop people from getting drugs! And guncontrol doesn't work because criminals will get their hands on guns anyway! 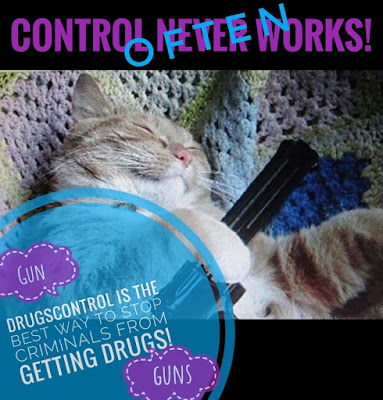 What do you think: is control a good or a bad thing?