One guy attempted to blow up one airplane with one explosive device, hidden in one shoe. Since that day almost every airline passenger is required to take of their shoes and have them checked before boarding an airplane 'because shoes could be dangerous!'. 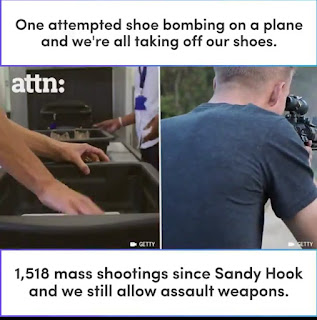 One lawndart once accidentally flew over a fence, hit one very unlucky very young child and hurt in in such a way that it died from the suffered injury. Since then it's illegal (in the United States of America) to buy or sell lawndarts.

Millions of times people got shot with a gun, mostly on purpose but often by accident. Since then it is illegal to buy or sell guns in the United States. Except that it's not.

So why ban shoes on planes and toys on lawns but not guns in the hands of idiots?