Since when was Qassem Soleimani an imminent threat?

'People who pose an imminent threat to American lives may be executed (click) without any kind of trial.' That was the message president Trump send the world early in this year when he ordered the execution of Qassem Soleimani, an Iranian general who was responsible for attacks in which people were killed.

According to this belief it is okay for any foreign country to execute Donald Trump. Since he is responsible for attacks in which people were killed. Like the five unnamed people killed in the bombing of Soleimani. And many other strikes. In hospitals, schools, et cetera.

The government of The Netherlands has officially stated it doesn't care at all that the USA simply ignored internatiol law, treaties, human rights and all that other stuff that takes the fun out of blowing things and people up. But has asked for 'an explanation'. In the future America will think twice before they 'forget' to contact their allies before they violently dismember a terrorist! Because who would want Dutch Defence Secretary Bijleveld to nicely ask you for an explanation for your extremely violent behaviour?

Just months ago the Secretary had 'accidentally told alternative facts and witheld information' (click) concerning the 'accidental' (again) killing of some 70 Iraqi civilians in an attack on ISIS. 'Yeah, well, things happen. People shouldn't make a big fuss about it.'

Interestingly enough the Iranian leader, who has been known to head the Quds forces since 1998, killing thousands of civilians, was only 'an imminent threat' since a few hours after (...) his early demise. Coaincidentally a few weeks after president Trump becoming the third American president ever to get impeached. 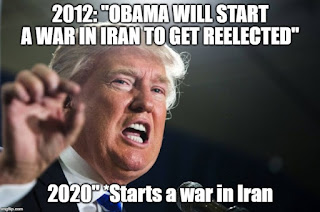 It raises the question: if  'The Greatest Military Force in the World' knew Soleimani was a villain back in 1998, why did they wait so long to elimante him? Perhaps because it's common knowledge that a killed general will not stop his army?

Until recently Soleimani was an important US ally (click) in the battle against the Taliban, al Qaida and ISIS. According to some sources (click) the general was on his way on a diplomatic mission. Send by the Iraqi government on a Trump-Pompeo missive.

In my opinion judges should be the ones who decide if someone is innocent or not. Presidents should behave presidential and not act as judge, jury and executioner.

But it seems the USA and its allies have decided the world no longer needs the UN, international treaties, consultation with allies, a list with human rights, an international court of justice or even judges for that matter. So what to do with all the money that will be saved if we just cancel silly things like 'rights', 'rules' and 'law'? Buy more bombs and drones? Buy more influence? Buy more politicians?

In the meantime stockmarket prices have gone down and oil prices have gone up while weapons manufacturers (click) went to sleep smiling after right the moment word of the murder got out. 'Well, things happen. And if they strike back, they will.', to quote an American President.