When someone does something bad it's always somebody else's fault. Right? So, when slightly coloured Muslim Omar Mareen killed 50 people in a gayclub in Orlando and the media discovered he was a fan of ISIL, of course his actions were the fault of the all to known Muslim organisation. Right?

When the white Christian Norwegian Anders Breivik killed 70 people at gatherings of socialists and the media found out he was a big fan of Dutch right wing politician Geert Wilders, they immediately assumed the killings were solely the fault of...Anders Breivik.

Is it me or does this way of thinking not make any sense at all? 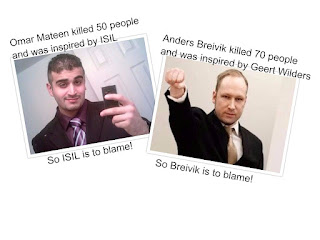