Why the gap between rich and poor gets bigger 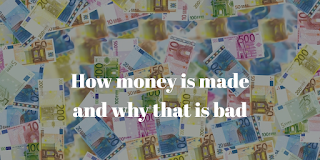 Your government tells banks it's okay to produce money (in the form of notes, loans, coins or computer digits out of thin air. Banks give out that money at an interest. The first ones to lend money (governments and large corporations) profit the most. Next to the banks themselves of course.

The further down the pyramid, the less the money is worth because there is an always increasing amount of the stuff. Soon the ones at the bottom of the pyramid (you and me and actual poor people) can't afford what they used to be able to buy. And will have to borrow more money. From the banks. Who will create that money, charge interest. And so on.

Occasionally someone manages to climb a step on the pyramid. But not very often. That's how it works. That's why the rich keep getting richer and the poor keep getting poorer. But one day there will be no more people at the bottom of the pyramid because they will have died of starvation. People who are dead are incapable of borrowing money. And the banks will go bankrupt. End of system.

So perhaps the system should be changed into a system that works for EVERYONE and not just the 'happy few'?

Your thoughts on this are appreciated.
op Thursday, September 15, 2016