Even though Donald Trump is lying, people still cheer him on.

Even though Donald Trump is lying, people still cheer him on. As a matter of fact: his fans are more than happy to spread the lies he comes up with. Just like his Dutch counterpart, Geert Wilders (the son of a women from Indonesia, the largest Muslim nation in the world who dyed his dark brown hair blonde to create a distance with his heritage, running for Prime Minister in march 2017) he loves to make false claims, supported by false arguments like: 'I know it for a fact because I said so.' and 'That you can't prove otherwise, proves my statement is true.'

Both narcissist racists ignore the millions of Muslims being hurt by and protesting against the likes of ISIS, al-Qaida and Boko Haram.

Trump, Wilders and other 'alt-right' advocates (just a few years ago - when we had freedom of speech for EVERYONE and not just for people who agree with the USA's president-elect and some other liars - I would have been allowed to call them neo-nazi's with the only difference of them targeting Muslims in stead of Jews as their great examples did) love to claim 'the mainstraim media' collaborates with 'left' (who 'left' is, is yet to be determined. Apparently everyone who's not a racist.) to 'ignore the voices of the silent majority.

I have one more question for those willing to do everything Trump or Wilders asks from them, put in a 'lolcat': 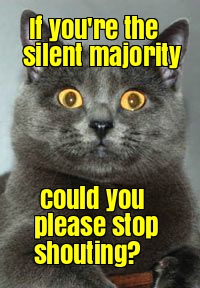