Should drugs be forbidden?

'Big Pharma' is responsible for tens of thousands of deaths a year. In America alone. Yes, that's right: legal drugs kill more people than illegal drugs. And Donald Trump will NOT take action to get that number down. Nor will Hillary Clinton, nor did the Bush' family and nor did Barack Obama. 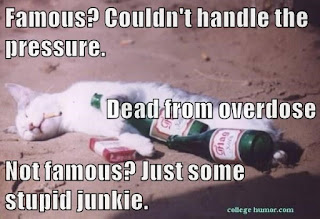 And I've always wondered: if the US government is so adamant about removing drugs from society and hates drug abusers so much they spend billions of dollars on the 'war on drugs', why has there never ever been a raid of the house of Charlie Sheen? Why is the DEA not active in Hollywood? Or on Wallstreet?

So, what do you think: should all drugs be forbidden or just the ones that cost thousands of people to die?