Civilians - including women and children - , living in the provence of Idlib, Syria were recently killed with poisoned gass. According to president Assad and his friend Putin of Russia, the attack was executed by rebels pretending to be soldiers from Assad's army and they bombed their own hideouts to make Assad look bad in the eyes of the world. Somehow I find that hard to believe.

It's easier to believe that 'president' Donald Trump would blame Barack Obama for the massacre in stead of taking up action against Assad, Putin and the likes. So, guess what Donald Trump did?

He claims Obama was weak for not wanting to intervene in the war in Syria.

But this is how Trump thought about intervening in Syria in 2013:

AGAIN, TO OUR VERY FOOLISH LEADER, DO NOT ATTACK SYRIA - IF YOU DO MANY VERY BAD THINGS WILL HAPPEN & FROM THAT FIGHT THE U.S. GETS NOTHING!
— Donald J. Trump (@realDonaldTrump) 5 september 2013

So, the question is: why did Trump intervene in the Syria conflict by firing 60 Tomahawk cruise missiles and starting a war with president Assad from Syria, angrying Assad's close friend and ally, president Putin from Russia?

Either way: who still does not know Donald Trump is a hypocrite and a liar must be extremely stupid. There are no excuses.


The Donald also liked to complain about Obama's golf trips: 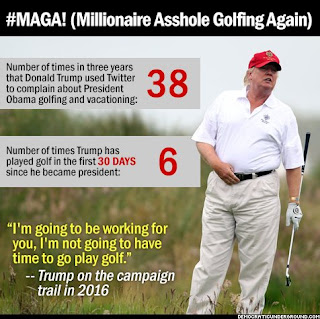